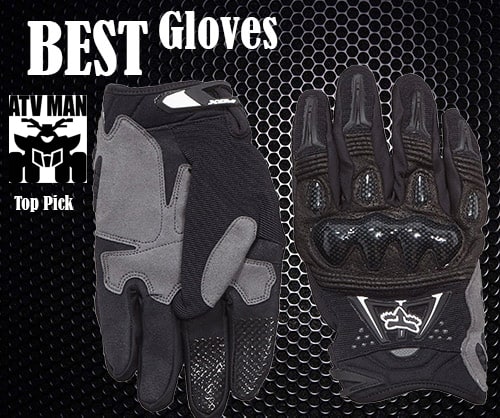 Buying ATV gloves sounds like it is a simple thing, but you are going to want to put a little more thought in it than you would imagine.  Growing up playing baseball, I learned the importance of having good batting gloves that felt good while wearing them.  I often didn’t like the way gloves felt and forewent wearing batting gloves, only to be left with some stingers when the ball hit the bat just right.  Gloves for ATV riding are much more important than batting gloves because they provide protection for a lot more than stingers.

Most gloves people use for riding ATVs simply are not protective enough for the off-road riding that I like to do.  Often when I am out riding an ATV, I am going through pokey bushes, sage brush or even cacti.  However, there are some good ATV gloves on the market that I can recommend.  My favorite gloves are the Fox Bomber Gloves, available on Amazon.com.  These gloves are great because they have an extra protective polycarbonate knuckle section, a thorn-proof (hopefully cactus proof, but I haven’t had to test that yet) padded interior, and even smartphone compatibility so you don’t have to take off the gloves to answer that annoying phone call (best reason to ride in remote places).  While these gloves cost a little more than I would want to pay for ATV gloves, I think they are totally worth it for their comfort, protection and quality.

If you aren’t doing as much serious off-road riding and aren’t riding where you are worried about getting your hands cut up,  the Fox Dirtpaw Gloves (available on Amazon). are a great option at a much lower price point than the Bomber gloves above.  These gloves don’t offer the same polycarbonate knuckle protection as the Bomber gloves, but the lycra knuckle protection is still much better than you are going to get with most gloves.  These gloves are going to work great for less serious ATV riders who aren’t going to push their machines through undergrowth  and bushes or risk falling off their ATV through really aggressive riding or rough terrain.

For the summer months, you will want a good breathable glove to keep your hands from turning into sweaty clumps of yuck, but ATVs are great because they are year-round machines unlike a jet ski or snow mobile.  Riding an ATV in the winter is going to freeze your hands if you don’t have some warm gloves.  Seriously, if you plan on riding an ATV if it is even a little chilly, you need something for your hands as they are out separated from your body heat taking the brunt of all that cold air you are flying through.   For most riders, I suggest something simple like these Fox Cold Weather Gloves, but if you are going to be doing some serious cold-weather riding, really want to keep your hands warm and have money to spend, I would look at the heated gloves from Volt on Amazon.

Hi! We are the Huntleys and have been riding ATVs since we were little and UTVs since they hit the scene many years ago. We love to go riding with our three kids all over the country. We started ATV Man to share our passion and what we have learned, as well as to help us continue to learn more, meet great people that share our love and encourage us to get out riding more!

This site is owned and operated by Huntley Law; however, nothing herein shall be construed as legal advice and in no way shall be construed to form an attorney-client relationship. It is a participant in the Amazon Services LLC Associates Program, an affiliate advertising program designed to provide a means for sites to earn advertising fees by advertising and linking to Amazon.com. This site also participates in other affiliate programs and is compensated for referring traffic and business to these companies.